Arrest Made in December 2018 Laundromat Robbery

Marlette Allen, 34, of 18th Street, Sarasota, has been arrested and is facing charges of Strong Arm Robbery (felony) in connection to a robbery that was caught on camera on New Year’s Eve morning.

Detectives say Allen entered the Colonial Laundry and Dry Cleaning, 290 North Lime Avenue, Sarasota, at approximately 8 a.m., December 31, 2018.  Allen was seen on camera walking into the business and speaking with the victim.  A short time later, Allen showed the victim a note that implied for the victim to give her all the money she has.  Allen took an unknown amount of cash before fleeing.

Video of the incident is on the Sarasota Police Department YouTube page at https://youtu.be/TA98WRu3sfg  A still shot from the video is also attached.

Two anonymous tips identified Allen as the suspect seen in the video.  Allen denied being at the laundromat.  Sarasota Police Detectives were able to compare video evidence to Allen’s physical attributes to develop probable cause to make an arrest. 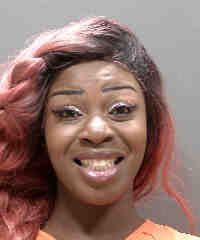