Detectives with the Sarasota Police Department have arrested Juan Jose Esparza, 20, of Bradenton.  He’s being charged with murder, armed burglary and additional charges in connection of a death over the weekend.  Esparza is being held at the Sarasota County Jail.

On Saturday, October 19, 2019 at approximately 10 a.m., Sarasota Police Department officers responded to a home on 6th Street, Sarasota, for a 911 call for assistance in regards to a possible suicide.

Officers received no response at the door and forcibly entered the home.  Officers found the victim, an adult male, deceased on the living room floor, of an apparent gunshot wound.  Evidence revealed that the victim did not die by suicide.

Detectives believe this is an isolated incident and the public is not in any danger.  Information about the victim is currently being withheld due to Marsy’s Law.

The case remains an active and ongoing investigation.  Anyone with any information on this case is asked to call Sarasota Police Detective Maria Llovio at 941-263-6836 or CrimeStoppers of Sarasota at 941-366-TIPS. 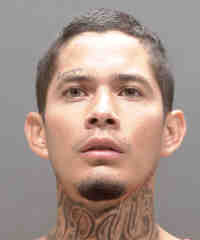 Juan Jose Esparza, 20, has been charged with murder and armed burglary.