Join the Sarasota Police Department on their next “virtual ride-along” later this week.  Friday, March 13, 2020, beginning at 6 p.m., Twitter users can virtually “ride along” for another ‘Tweet from the Beat’ with Patrol Officers during night shift.  This will focus on patrol operations as well as Operation 'Dry Streets' happening March 13-15, 2020.

Each year from around the middle of March through April, thousands of people travel throughout our Florida communities due to Spring Break.  This results in an influx in vehicular, bicycle, pedestrian, and private transportation throughout our community.

In an effort to save lives and stop drivers from drinking and driving, the Sarasota Police Department will be partnering with the Florida Sheriff's Association, Florida Highway Patrol and Florida Police Chiefs Association for a statewide DUI enforcement operation March 13 through March 15, 2020 as part of Operation 'Dry Streets.'  A special public service announcement about this operation can be viewed at https://youtu.be/EbHR5onAwE4

Officer Adam Bearden will share what he does while on night shift patrol through texts, videos, GIFs and various photos.  Partnership Policing Communications Coordinator Genevieve Judge will tweet on behalf of Officer Bearden.  Followers on Twitter @SarasotaPD will be able to ask questions and interact with the Sarasota Police Department while they are on patrol. 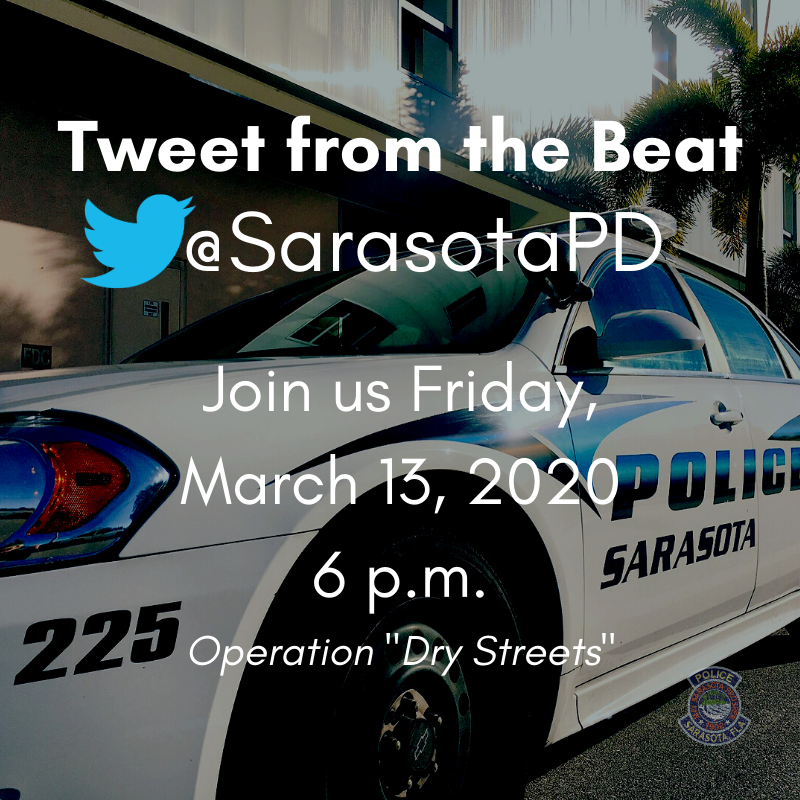